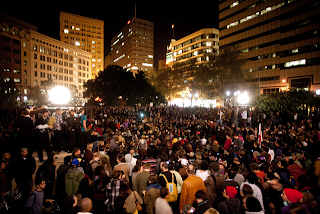 Yeah I’m Back @ It
After almost a year, I’m back on The Grind Oakland. It’s not that I left. I’ve just been struggling with life (like everyone else) and the state of things in The Town. Frankly, I have been fighting avoid talking about the same ole complaints everyone else has been on: The Economy. Occupy Oakland. Mayoral Recall. A ruptured Achilles tendon. All that has combined to make me a little less than motivated to write about the bright side of Oak City.

In all honesty, I started Mr. Oakland with the intent to talk about all that is good in our city. Being the eternal optimist and virtual cheerleader is tough because…can I be frank? There are some pretty shitty things happening around here. So with this first re-entry of 2012, I am committed to showing a balanced yet biased approach to the city I dig the most.
Without creating a long (dirty) laundry list of crap, I have penned a short parable. Parables worked for Jesus. Maybe it will work for Mr. Oakland

Once Upon A Time…
Think of The Bay as a family and each city as a sibling. Oakland is the second kid. Not a baby, but not an adult yet. A teenager. Work with me damn it!!!

The adults are completely frustrated by Oakland’s inability to measure up to its big sister Fran. She’s beautiful, popular, well loved, and always being put up in Oakland’s face as “Everyone’s Favorite” even though she lacks diversity (Fran is actually pretty beige). Oakland tries to not be bothered by this and is actually pretty well grounded in its contrasting edginess and street credibility. Sometimes it's too much and Oakland can often be heard mumbling, “F*** Fran!” “What’s so special about that b**** anyway?”

Deep down inside, though, Oakland knows what’s up, and is fearful of the inherit pain involved with change. Oakland wants love, but refuses to accept the fact that there is mad love available. All Oakland must do is embrace its worthiness and step into its own greatness. Because Oakland is the Heart O the Bay, her greatness is in many ways more relevant, and more accessible than Fran’s.
Don’t try to act like you didn’t get it. Ya mean?
Why Whitney SHOULD Matter To Oakland
I got the chance to see Whitney Houston in the late summer of 1985. She was opening for soul singer Jeffrey Osborne @ The Concord Pavilion. The show was important to me only because Osborne was “my boy” from back in his LTD days: A known entity. It was a weeknight show and I arrived early to get a good lawn seat and a good parking spot. I had to dip out so I could get to work in the AM. Whitney Houston was just an after thought: A no-name with a really good first album and unworthy of further consideration.
When she sang “There’s a boy, I know…” I knew and I was done. We all knew. We all heard it. We all saw it. We all felt it. She raised the energy level so high that the headliner dude never had a chance. Who was this child reaching inside every person within earshot? I was hooked and I knew why.
She represented the style of girl I loved. She was Brown and chocolaty. Had a brilliant smile and wore a TWA (teenie weenie afro). A PERFECT example of just plain ole “Black Girl Hotness”! I knew because she was like all the girls I grew up with: The beautiful Black girls from the neighborhood, from school, from church, and from 14th & Broadway. My “Oakland Girl” from New Jersey. You know? 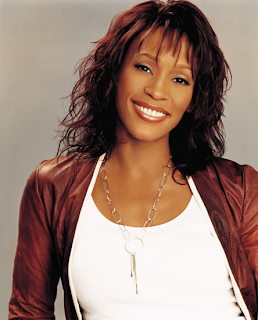 Even as she struggled very publicly in her relationship with her dad, her man, her family, and her drug use my love for Whitney never waned. Yeah, I laughed at the jokes, but in retrospect I now know that I
laughed to hide the pain I felt for her. The identical pain I feel for my Oakland sisters, ‘aintees’, cousins, mothers, and wives embroiiled in the same battles.
Whitney’s troubles are our troubles. We see her in the faces of so many people of all walks of life, shades, and colors in Oakland that sometimes we become numb. Sometimes we even laugh to cover our pain. Sometimes we are cruel. Sometimes we just give up and become indifferent. We are all affected daily by this “blurred self-image” of The Town and it takes a heavy toll on the entire community.

We loved Whitney when she was young and beautiful, As “drug addict” we viewed her life as entertainment and derided her. She’s gone now, and we only remember the beauty and we love her again. We loved our Oakland Girl back in the day. How many more do we have to lose before we love HER again?

MISSSEY: A Good Place To Start
Shout out to Nola Brantley, co-founder and the current Executive Director of OAKLAND-BASED MISSSEY for being named one of ABC 7’s African American Salutes honorees. MISSSEY holistically addresses the specific needs of 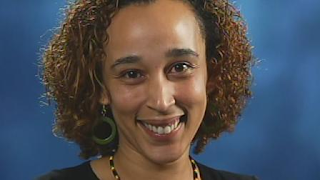 Congratulations Nola and the MISSSEY crew fo whatcha do!
Click on the link to learn more about this fantastic organization and to contribute to the cause. http://www.misssey.org/index.html

Oakland Stand Up!
Posted by Mr. Oakland at 4:09 PM No comments: