Optimistic Pessimism aka Holding Out For The Good

I've been waiting for the new year to roll out before I start being optimistic about the new year. Last year was challenging for everyone: Even Mr. Oakland had to tighten that belt up to make it through. With that in mind, I have been slow to jumpin' on that band wagon of new year positivity.

Speaking of Missed Opportunities...
Don't know why you missed The Ken 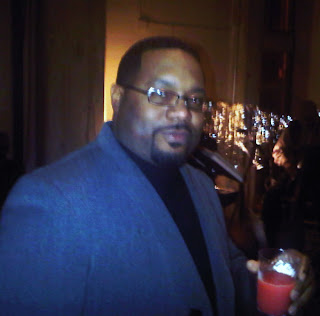 ny Hawkins Groovin' Deep Music Project hosted by Charles Blades Barber Spa on December 30th. (See my last dispatch cause I told ya 'bout it!) What was there not to love about this set? Great food, slammin' jazz, special guest violinist and Oakland Public Conservatory faculty member Sandra Poindexter, and a beautiful slice of Oakland Goodness (Oakland folk) ready to soak up the holidays. Oh, did I mention that it was only $10? Standing Room Only! Oakland's jazz traditions are based in the jazz clubs (not ONE club). Look out for intimate venues and rich performances springing up all over The Town. Big Ups and many thank yous to Charles Blades for knowing what's up! www.charlesbladesbarberspa.com


Tuff(y) and Kuhl!
After reflecting on 2010, I realized that I missed some great positive jump off. One missed opportunity was Lil Tuffy's 2nd Annual "Showprints and Art" @ Kuhl Frames + Art. There was no way I was gonna miss the 3rd annual show!

Lil Tuffy is best known for his gig posters. Artists from MC Chris, Maus Haus, Thomas Dolby, Oakland's own Digital Underground, WuTang Clan, and Pavement. His aggressive use of color and space make for some thought provoking and humorous imagery. And because he is a self described member of the "attention deficit disorder generation" (Why is it so easy for me to relate to that?), he has created a prolific body of work influenced by, "1960's Russian matchbooks, Old West WANTED posters, National Pa 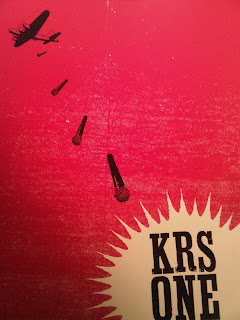 rk postcards, cocktail napkins, '70s strip club newspaper ads, the history of steel in Pittsburgh, and the atom bomb". The show has over 200 posters.

This KRS One joint was a dream acquisition. Been coveting that one for over 5 years. Big Man Lil Tuffy pointed me in the right direction and I was able to swoop this one up for myself. I know where the last available one resides. If you want it, I can hook that up for you. If you're astonished, don't be. I'm Mr. Oakland!

Since I Love Value
Most posters are in the $40 range. Consult with Travis about custom framing. Archival quality work is the rule. The highest quality and craftsmanship is how Travis does it. There are ready-fit frames to precisely fit the majority of Tuffy's formats as well. Or you can keep running to Ikea and Z Gallery for that mass-produced garbage all your friends keep copping. If more value is required, Tuffy and Travis will be hosting a closing reception January 29th from 5-9 PM. Does free PBR mean anything to ya? Limited edition poster, custom framing, and a free beer? Hmm...just go! 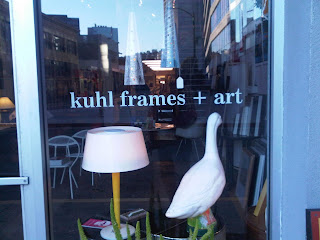 www.kuhlframes.com
412 22nd Street
Mon-Fri : 10:30 - 6:00
Sat : 11:00 - 4:00
Sun : Closed
House of Paradiso: Just RELEASE
The Oakland house music scene just received another shot in the arm this past Thursday. Legendary local spinnas DJ fflood and DJ Cecil are at it again with a new weekly lovefest @ Paradiso (2272 Telegraph Avenue). RELEASE promises to satisfy in the tradition of The People, Soulful Sundays, Magic Milkcrates, and New Life. A two-level party with soulful house upstairs and dance hall downstairs. These DJs are skilled, diverse, and eclectic. Look for the dynamic duo to tag team on the sets throughout the evening. Every Thursday from 9PM-2AM RELEASE should satisfy your midweek dance jones. www.disolounge.com

Don't forget to tell the DJs and Mesfin Mr. Oakland sent you! 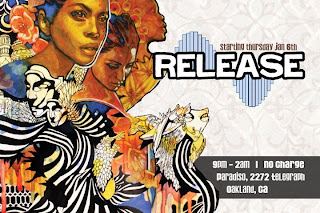