Rawk and Roll & The Depths of House

Fallin' In Love All Over Again
I love Oakland and The East Bay because we embody "openness" and "inclusion" on every level. The perfect laboratory for all that is possible. No pigeon-holes allowed! Some home girls and a house head transplant from the East Coast are making THIS Friday night mighty musically tasty. Read on! 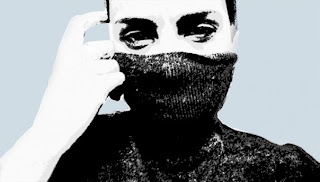 Last May, DJ Oliver invited a few friends over to celebrate his new digs-some 20+ musicians, vocalists, performers, DJs. You know? Just a little party. One of the performers was a local rapper/vocalist named Holly Saucy. I remember Holly because she was focused. So focused that she killed it in spite of a technical problem. Professional and polished. All I could think was, "Finally!" and I looked forward to an opportunity to see her do her thing again. So I was excited to hear about her new show Damn She Rawks premiering this Friday at the Shattuck Down Low.

What excited me was a featured artists list that included Saucy, Punk Funk Mob, and legendary Bay Area DJ queen Pam The Funkstress. Ok. Saw PFM last year for the first time as well (BTW they ripped it as well) and I have always wanted to hear Pam spin, but on the same bill? Did I mention that Jessica Holter (Punanny Poets) will MC? Now thats something. I had to call Olaywa Austin, founder of Town Logic Media Group and the shows promoter for the real.

A "No Poser" Show
Damn She Rawks came from a concept that Saucy and Austin devised as a way to shed light on hometown rock sheroes. "DSR is a collective of very talented ethnic women rockers", Olaywa continues, "the artists most often left out of rock music discussions." A seasoned MC, Holly is a seasoned stage vet. "Holly h 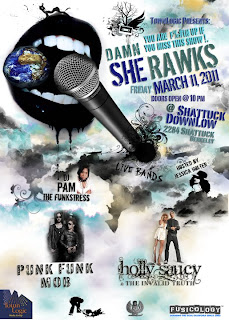 as performed around the world", Austin warns. "She has built strong relationships with other brown lady performers." The plan? Pick up local stars from around the globe as headliners and have the ladies of DSR serve as the "opening acts" for the best local lady rockers you've never heard of. A traveling "under card" of sorts. A September Prague show is in the works as well as shows featuring Latoya London's band Urban Punk and Stax Records artist N’dambi.

Is this truly unique (Oakland) approach the beginnings of a new standard? I'll be watching!

EVOLVE: Soulful Dance Music
House DJ Soul Luciani is on a mission and he is evangelizing for Oakland's ho 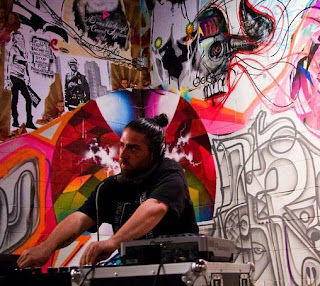 use music scene! You know the genre: Soulful dance music marked by repetitive undertones and percussive overlay. Made legendary by DJs/Producers like Louie Vega, Joe Claussel, and Timmy Regisford. Soul believes Oakland is ready for choices and he's ready to lend a hand.

Under a canopy of Old Oakland trees and over tea, he recently explained his belief in Oakland's future as a House Music Mecca. "Oakland is the center of The Bay and therefore, closer to culture and more firmly rooted." "Like Oakland, house is down to earth and open."

The Temple Effect
Luciani talks about the music as a platform for change; for healing. "Like drumming, house music opens the mind and the body. When you leave you feel rejuvenated." "I am creating ambassadors for Oakland", he continues. "This music is inclusive...it is spiritual."

His passion is compelling. It comes from witnessing the healing effects of the music. It all depends on what you want to attract. "Music is a subconscious magnet...you can talk about negativity or you can talk about love and caring." House makes you high because house music is about changing...about spirituality." That's the temple effect. Partying with HIGHER purpose.

Keep an eye out for parties that bump until sunset. Until then, DJs Soul, David Harness, and Rahiem Jihad set the tone at from 9-2 @ Evolve. It goes down every second Friday at Era Art Bar.http://www.oaklandera.com/ 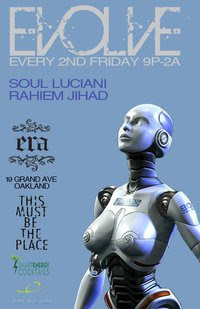 The World Is Calling 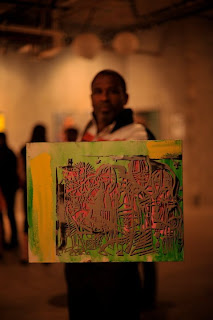 I told ya'll!
Last year Mr. Oakland introduced you to Oakland-based paintbrush slinger Carly Ivan Garcia. Film, international exhibitions (Miami Basel '09 and '10), and now a NYC show at Fountain NY presented by TINCA.Inc NY. Know it or not, Oakland artists are making moves. The international stage is the goal. Keep doing it Carly! BTW thats me with my first CIG joint.

Who's got next? Bryon Malik.
I met Malik almost 3 years ago @ Tyranny Allen's sneaker box, Verse. (Man I miss that spot!) He instantly let me know what was up, "I'm a professional photographer." Respect. His priorities seemed clear and he believed in his abilities. I thought it might be good to work together in the future.
Since then, I have had the opportunity to work with him on a few successful projects. He has proven to driven and persistent. 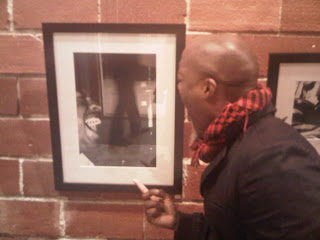 He is always pushin' to improve. His momentum and work ethic seems to propel him through space. Think rocket! In homage to the work he loves, Malik shoots his subjects with a high level of respect. "I have put everything that I am into my craft." Because of this deep personal involvement (spiritual even) he becomes one with his subjects. Whether its The People party, a high fashion shoot, or the cataloguing of a private collection of ancient African masks, he exhibits the rare affinity to interact within the moment without becoming the moment.

See and Be @ Remedy Tonight
Capturing life's moments is a priority for Malik. "I create photographic documentaries." His new solo show, "Seeing and Being", is the result of 13 years of honing and fine tuning of his craft. The show will be an excellent opportunity to experience the broad spectrum within B. Malik shoots under. Live performance, still life, outdoor, fashion, and just plain-old random shit.

Opening tonight @ Remedy Cafe 4316 Telegraph Ave. I have fallen in love with this coffee shop! Since Awaken Cafe closed (soon to re-open) I have completely lost myself in this warm, urban cabin on Telegraph. The mix of retro, modern, reused stylings of the cafe should balance well with the angular beauty of the images. I haven't seen the show, but it will be a stop on my magical Murmur tour tonight. It will be my first time seeing it and I know there will be something that speaks to me. When the work speaks, I gotta move on it! You know what I always say? "Love an artist? Feed an artist."

After The Show: Head over to Mua's for Midnight Marauders

Ahn and Ahn Ahn and Ah, Ah, and Ahn's 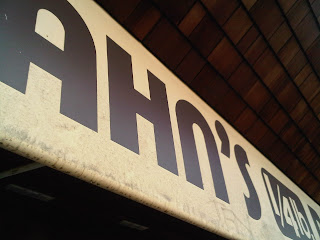 Was hanging out with my favorite pregnant person this week. I like pregnant folk: They never slip on a food run. You are guaranteed to get your eat on when a expectant mother's food drive kicks in because she has been planning and plotting the next food move for hours. Shame on me for admitting this, but I had my first Ahn's Quarter pound Burger during that run...OMG!!!! Pastrami Cheesburger w/grilled onions...Phewwwwwwwwwwwww oui!!!! I have no idea why I never stopped @ that little brick hut in the past. I do know I will spend the rest of my life making up for it. Don't be like me, be better than me. Can't wait for my next one. Thank you pregnant lady. Thank you. 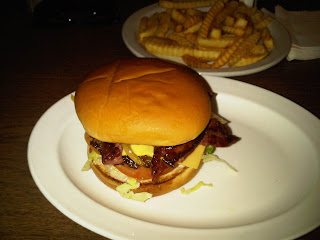 Next Time: Hooked On Derby!
Posted by Mr. Oakland at 4:01 PM No comments: